Eggbert is a kind and friendly character in the series... sort of. No he is an annoying little prick to his brothers. In phone calls he was leaving for AGK, he said some questionable things. One such being that he murdered his brother. His brother then got up. Only Aaron & Jojo heard these phone calls, and they ignored it.

He had sold AGK a dvd of a game that didn't work. It soon got updated, so Eggbert woke AGK up. However his brother Owl got in the way and bothered him. It also turns out he is not in the same reality as AGK. He also broke the fourth wall, and Owl had to stop him. He tried another time, but Owl still stopped him. Owl told him to stop or he'd call the "fourth wall breaker police".

AGK got him to prank call Hitler. Eggbert pretended to be a Nigerian scammer. His scammer name is "Bob Commear". He tried to get him to pay house payments. Hitler didn't fall for it. Hitler also knew AGK had to do with this. Eggbert then called him fat, and it ended there. His phone is also a calculator.

He likes to bother Luigi. He bothered him while he was sleeping. He also doesn't understand swear words. He also made Luigi put him in a Cheez Itz box so he could be one. He always loves to bother him. He even tried to ground him for no reason, and Luigi tried to make him angry by calling him fat. 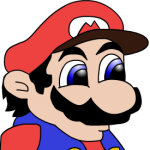